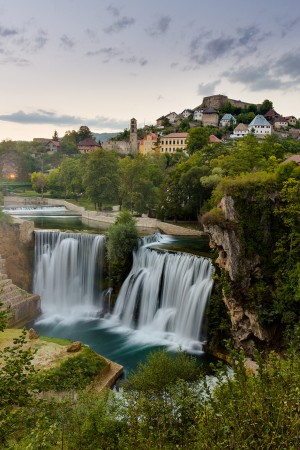 Jajce bears the epithet ‘royal’ having been the residence of the Bosnian kings. It is the place where Stjepan Tomašević, the last Bosnian king, resided, and lost his life in 1463. The founder of the town was Hrvoje Vukčić Hrvatinić, the Herzog of Split.

The Waterfall. It is one of the twelve most beautiful in the world, and the only one located in the very heart of the town. The way it is created makes it unique – the River Pliva dives from a cliff into the River Vrbas at the point of their confluence, ending its flow in an original way.

The Citadel in Jajce. This citadel used to be the biggest and the best fortified, so that the great conqueror, sultan Mehmed El-Fatih did not succeed in conquering it, not even after he had conquered the whole of Bosnia. It kept resisting the Ottomans for 65 years and. In order to fortify it, it was built in four phases. Within the west rampart of the Citadel there is the Travnik Gate. It was built in the 15th c. In the 17th c. Omer bey’s House was built next to it. The sight of an oriental and a mediaeval structure joined together is a beautiful and paradigmatic example of the symbiosis of the western and the eastern which are a Bosnian characteristic. The Banjaluka Gate was built as part of the east rampart of the Jajce Citadel.

The Mithraic Temple – tauroctony. The cult of Mithras, an Indo-Iranian divinity, was practiced by the Romans, thus the temple being artifact of ancient culture in Jajce. It was built by the Romans in the 4th c. CE, and discovered in 1931. On entering the temple the view opens to the relief representing the sacrifice of the sacred bull.

The Bear Tower. It was built in the Romanesque style and that fact indicates that it is one of the earliest structures from the Bosnian Middle Ages. There are two theories about the origin of its name. One goes that it was named after the bear due to its bulkiness and thickness of walls which reaches 6 meters. Another – a more popular one -  theory goes that it was named so because it was the place where bears, fed on captives and convicts, were kept.

The Tower of St Luke. This is actually the bell-tower of the Gothic church of Holy Mary, although the whole church came to be called that name due to metonymy. It was built in the 15th c. and the characteristics of its structure refer to as much as three different styles: Romanesque, Gothic and Renaissance. The building of the church is not dated exactly, but it is assumed that it was erected at the site of an earlier Romanesque church at the beginning of the 15th c. The church was the place where the relics of St Luke the Evangelist were enshrined. The relics were brought to Jajce by the last Bosnian Queen, Mara Jelena, as her dowry.

The Catacombs. They are a unique underground crypt, built by Hrvoje Vukčić Hrvatinić, the founder of Jajce, who intended it for himself and his family. If we suppress the initial shudder and enter the chill of the crypt, we will se the altar with the apse with a Gothic arch. Based on an unfinished drawing of Hrvoje’s coat-of-arms found near the entrance, it was determined that the crypt was built in 1410.

Esma Sultana Mosque. The Sultana was married to a Bosnian vizier – Mehmed-Pasha Mušinović and had the mosque built in 1753. A beautiful and tragic story goes about the building of the mosque. The Sultana fell ill and was told she would get well again if she built a mosque where two rivers become one. The unhappy sultana did that, paying for it with an earring she took off her ear. She did not live to see the mosque finished, but the elegance and the beauty of the building keep the memory of her fate alive.