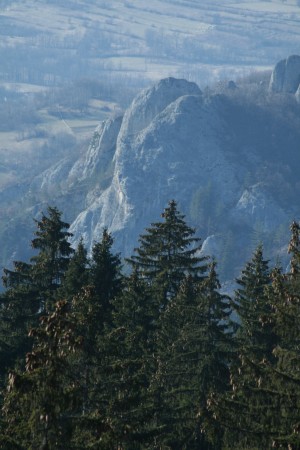 The town of Jajce is surrounded by a range of mountains of medium height (Ćusine, Bukovica, Hum, Dnolučka planina, Kik and Ranče), which abound in deciduous and coniferous woods, mountain meadows and pastures. There are springs of fresh and wholesome water, as well as many streams and rivulets (Komotinski potok, Šedinac, Lučina, Raševik, and Rika) in these mountains. The rivulets form numerous rapids, eddies, falls and cascades. The whole of Komotinski potok (the Komotin stream) runs through a canyon. Beside the marked pedestrian trails which take from three up to several hours to cover, these mountains offer a great number of activities such as orienteering, skiing, botanizing and photo safari. The extraordinary cliffs of the mountain of Hum lend themselves to rock climbing and properly marked environment-friendly and well-maintained trails lead to them. It is on the slopes of this mountain that one will find the tomb of the last Bosnian king, Stjepan Tomašević, as well as the habitat of one of the most valuable of Bosnian endemic plants, the Bosnian campanula, Symphyandra hofmannii. The mountain of Ranče is adorned by a range of mountain meadows and several clusters of seasonal shepherds’ dwellings, among which the most attractive and the largest are Tornice and Bukovik. Beside the marked and well-maintained trails, there are several hunting lodges available for the visitors to make their staying in the mountains around Jajce more comfortable. It is not just the existence of natural rarities that distinguishes the mountains around Jajce. There are also monuments of the distant and near past: mediaeval necropolises with stećak tombstones, mediaeval towns (Vinac and Komotingrad), as well as a great number of religious objects – churches, chapels, mosques, domed Islamic burial sites.